„And who will cook tomorrow?”, with Tim Raue and Manuel Poschadel [DE]

Tim Raue is one of Germany’s most renowned chefs – which comes as no surprise. The Berlin chef, born in 1974, has redefined German haute cuisine, and is one of just a handful of German chefs who have made a name for themselves internationally. As such, the Restaurant Tim Raue not only has two Michelin Stars, 19.5 Gault&Millau points and was named “Restaurant of the Year 2019” by FEINSCHMECKER – it has also been one of The World’s 50 Best Restaurants since 2016 – in fact, it is the only German restaurant in the top 50, ranking 40th.

What’s more, Tim Raue is the only German chef to have featured in an episode of the world-renowned Chef’s Table series on NETFLIX. Raue also makes regular appearances on German TV: the 45-year-old often appears on VOX’s hit show KITCHEN IMPOSSIBLE; he is co-creator of the new VOX format READY TO BEEF; and a member of the jury in THE TASTE on SAT1.

He is also engaged as culinary advisor to the Brasserie Colette Tim Raue in Munich, Constance and Berlin, and to the Villa Kellermann in Potsdam. The Asian restaurant concept HANAMI by Tim Raue was launched on the TUI Mein Schiff 5 cruise ship in 2016, and has since been rolled out to three more of the fleet’s ships.

The chef is also responsible for the restaurant The K – by Tim Raue, which opened in the Kulm Hotel St. Moritz in the winter season, and was awarded a Michelin Star in January 2019. 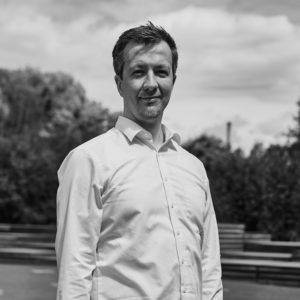 Manuel Poschadel learned community catering from scratch and worked successfully for many years as a kitchen manager in Berlin school catering. Now, as a trainer of Kantine Zukunft, he’s passing over his experience and high standards to cooks, thus supporting the transformation towards sustainable, healthy and above all enjoyable institutional catering